4.8 out of 5 stars
Best for:
Medium and Large businesses
Pricing:
On request

4.8 out of 5 stars
Best for:
Medium and Large businesses
Pricing:
On request

Now and again we review an influencer platform that’s been created by a company so old, we have to marvel that their incorporation happened before influencer marketing was even a thing. Usually it’s an ad agency pivoting into tech, sometimes it’s a tech firm expanding into marketing, but it’s always a company that was born and came of age while the internet was already a ubiquitous feature of our daily lives.

Influencer Intelligence shatters the record for oldest company we’ve reviewed here. This company is so old that, when it was formed, the word “data” had four syllables and was pronounced “information.” The year was 1989, and the company was called The Red Pages then. It was a subscription-based directory of celebrity talent, meant to guide marketers toward identifying the right talent for product endorsements and ad campaigns. A small team of people researched the more than 25k celebrities listed within the directory, providing glimpses into their background, past endorsements, awards, and any quantifiable value they have brought (or could bring) to a marketing endeavor. Most importantly, though, it contained hard-to-find contact information for these celebrities’ agents and representatives, and this was information worth paying for.

While the Red Pages evolved with technology over the years, their basic approach remained more or less intact until around 2012. At that time, social media presented a new opportunity to get deeper data on celebrities and audiences alike, and the investment into more robust analytics became a priority. In this way, they found themselves exactly where they needed to be by the time influencer marketing became a phenomenon—and they had the good sense to start evolving their business model to stay current with this newest marketing trend.

It was under this new paradigm—and with a lot more data—that the Red Pages became Influencer Intelligence. While their directory has expanded beyond just big time famous people, their client base seems very much a who’s who of very large brands: Netflix, Disney, Conde Naste, Google, Unilever and Cartier are just a few of the names you’ve heard of. So, a company of this pedigree, with this much long term success, and a huge list of multinational companies as customers must be doing something right, right?

Of course. That wasn’t a trick question.

Influencer Intelligence
Pros and Cons
Hybrid of algorithm- and human-sourced data
Unparalleled audience analysis
Access to a wealth of content with industry insights and trends
Sometimes an overwhelming amount of data
Best for: Medium and Large businesses
Ratings
Features
4.8
Ease of Use
4.8
Reporting
5.0
Overall Score
4.8
Sponsored

The number of names in their directory has jumped from 25k to more than 140k, the data’s gotten deeper, and the features of the Influencer Intelligence platform go far beyond a simple listing with contact info—but you can still buy in as if it were just a larger, digital version of the Red Pages with the lowest tier of service. While it’s common for SaaS platforms to offer multiple levels of service, Influencer Intelligence didn’t need to do that. But they did, anyway, and the result is that more than just your giant brands will find something of use here, and within their budget.

Influencer Intelligence (II) takes a hybrid approach to analytics, supplementing its algorithmically-mined data with human-led research. While this approach on its own isn’t unusual, II’s human team has a big advantage over competitors, in that they’ve been doing this for more than 30 years. That kind of time investment yields more than experience: it means their research team has the contacts and insider’s track to information you couldn’t possibly get from a brand new startup with a similar hybrid approach. The events calendar and direct contacts we’ve already mentioned are just a couple of examples of this. 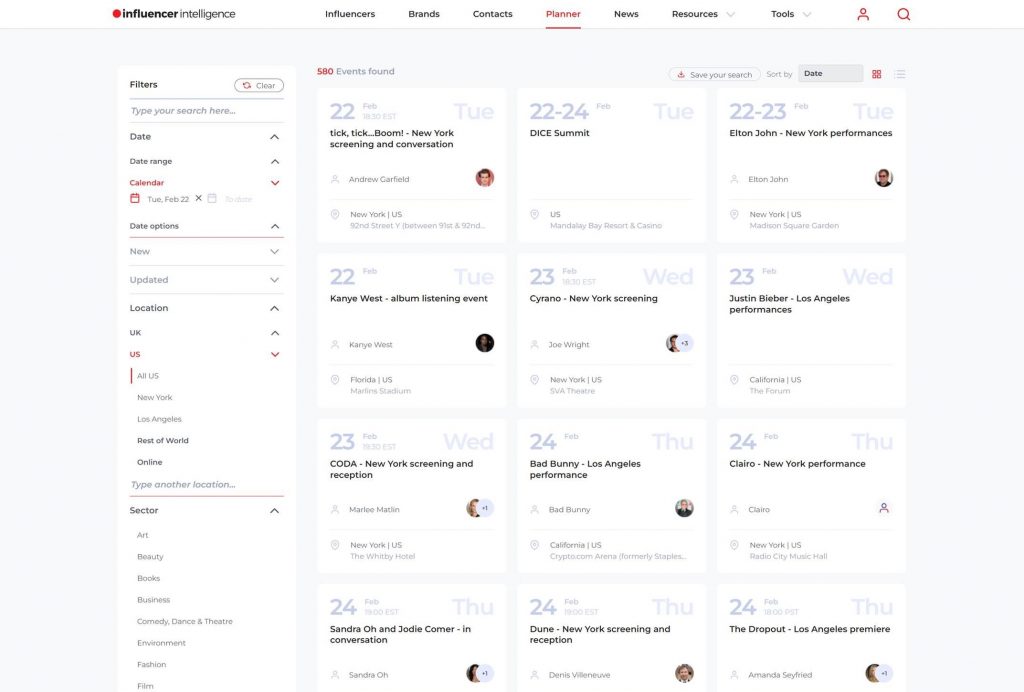 Because they’ve been around so long, they’re also no strangers to tech. A business doesn’t survive for 30+ years by never evolving and adapting, and so when it came time to really go full steam into the influencer world, II had already been through a few tech revolutions and come out the other side of them thriving. The tech expertise is evident at your very first login; it’s clear this is a company that’s at home online.

If you’ve used any kind of influencer discovery tool before, then you’ll feel right at home poking around the interface of Influencer Intelligence. But you’ll also see some things that you might not expect. In addition to a well-placed search bar for starting a more deliberate discovery session, you’ll also see a few groupings of recommendations for influencers that really show off the human touches behind the scenes:

Rounding out the benefits of human-directed research is the wealth of content that’s available to Influencer Intelligence customers. Expanding the focus out to the influencer marketing industry in general, there are a number of reports available, each one filled with insights as to the current and future trends of the industry, guides for success (like an “Influencer Marketing Playbook for TikTok”), and a series of webinars all meant to keep marketers actively engaged and informed.

With all this focus on the people that make Influencer Intelligence so useful, we shouldn’t forget to highlight the contributions of all that new-fashioned data that’s been harvested and analyzed by algorithms.

Clicking your way into an influencer’s profile feels like standing at the edge of a highly informative and supremely organized rabbit hole—and marketers will want to dive right in. The front page is like the back of a trading card, with its summary of the person in question—their bio, birthday, location, social links—and some relevant statistics about their follower counts across all channels. You’ll also see some stats that are the results of analysis, like their Social Media Value and a proprietary score developed by Influencer Intelligence that they’ve dubbed their “Celebrity Equity.” You’ll also get a scoring of the public’s “awareness” of this person, as well as their appeal, which is based on a sentiment analysis of the conversations happening online. All of these scores are updated daily, and reflect the previous 90 days of social activity.

This is where you’ll find contact information, as well, either for the influencer directly or their agent/rep. This seems a small detail, but it’s worth pointing out: when Influencer Intelligence says they provide a way to make contact, it’s because they’re actually giving you a working method to make it. Other platforms will boast that you can contact everyone there, but that’s built on the fact they only show you influencers who are actually on their platform (meaning you can communicate within the app itself). This is not what Influencer Intelligence means by facilitating contact. They don’t want to tie your communication into the platform, going so far as to describe that belief as a company “ethos.”

From the profile summary, you’ll see a series of navigation tabs that will take you on the deep dive into whatever influencer you’re looking at. There are, of course, old standards, like engagement rates, likes, all broken down by social channel—helpful in understanding where to focus your attention with each influencer. Much easier than looking at all these numbers, though, is the visual representation of all posts across channels. Influencer Intelligence plots out all posts along a graph, the X axis representing the last 90 days, and the Y axis representing performance. Each plotted point is color coded to a social channel, and it’s super easy to just find the points that hover well above all the others. Hold your mouse over that point, and the actual post appears as an overlay, with the engagement rate and social media value appended. 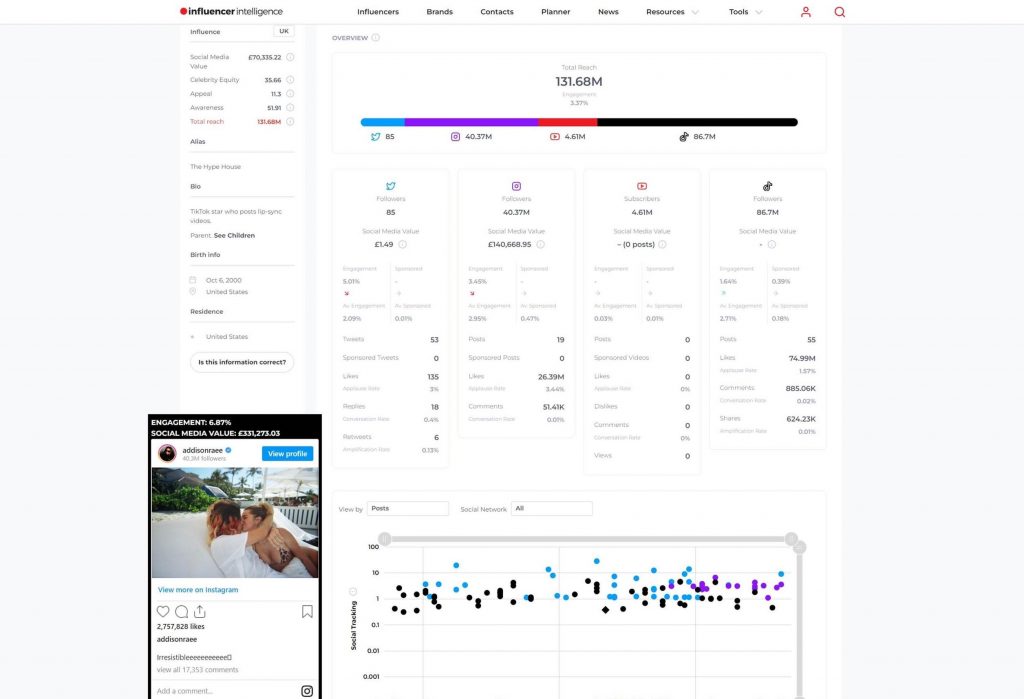 Dig into their audience, and you’ll get expected data like age and gender, but then you’ll also get an idea of how those compare with the average of the rest of the platform. Location breakdowns of the audience can be found in heat maps, which makes it easy to see where the most engagement is happening—but not as easy as it could be. In one of the weirdest design choices we’ve seen, the “heat” of any given area is represented along several shades of grey. They do light up into a color as you hover over each area, but it’s really difficult to discern between each incremental level of engagement. Beyond that, you’re getting real-deal data to give you a real insight into what kind of consumer these audience members are: their education level, income, employment, and brand affinities. You’ll see likes and interests, but these will be broken down even further than is the standard: it’s cool to know someone is into music, but it’s cooler to know exactly what kind of music. II also lets you in on what other kinds of media they consume—magazines, news outlets, that sort of thing—along with other influencers that the audience follows. Just the audience tab alone is exhaustive, and that’s only one of nine different categories of data that Influencer Intelligence gives you for each profile. 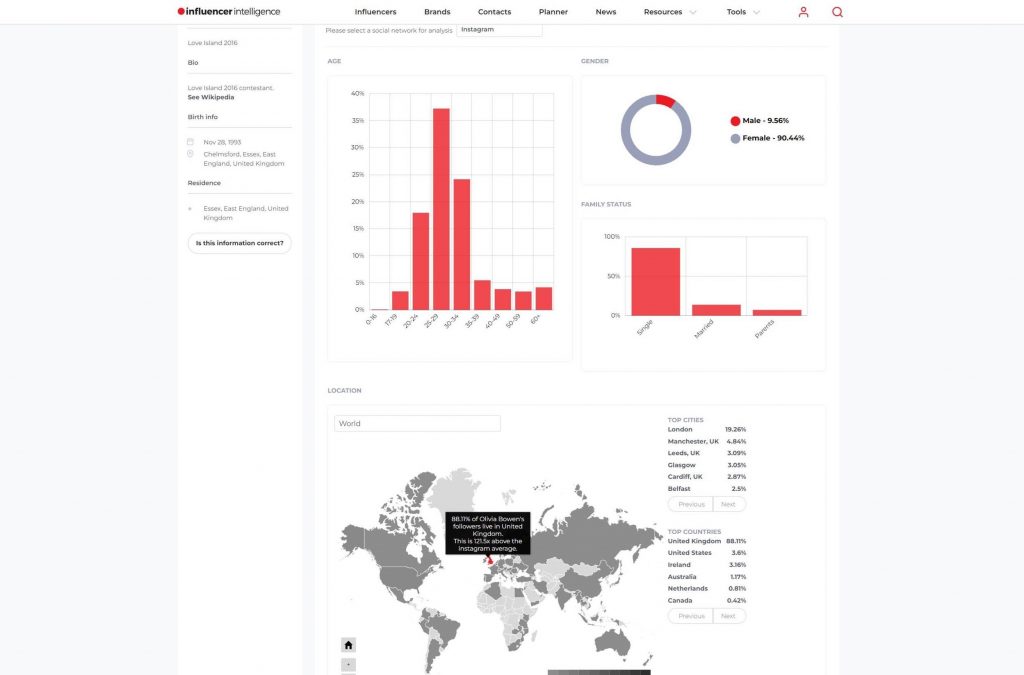 Another innovative bit of information you can get on each influencer is a Persona Overview, which gives you insight into their personality attributes. What makes this especially useful is that these attributes aren’t necessarily a look into who this person is, but a reflection of how their audience sees them. It’s their perception that matters, and if millions of Ed Sheeran fans think the guy is attractive and innovative, well—that’s their truth, and the rest of us are living in it. Knowing the audience's perceptions arms you to work with an influencer in a way that will resonate with that audience. 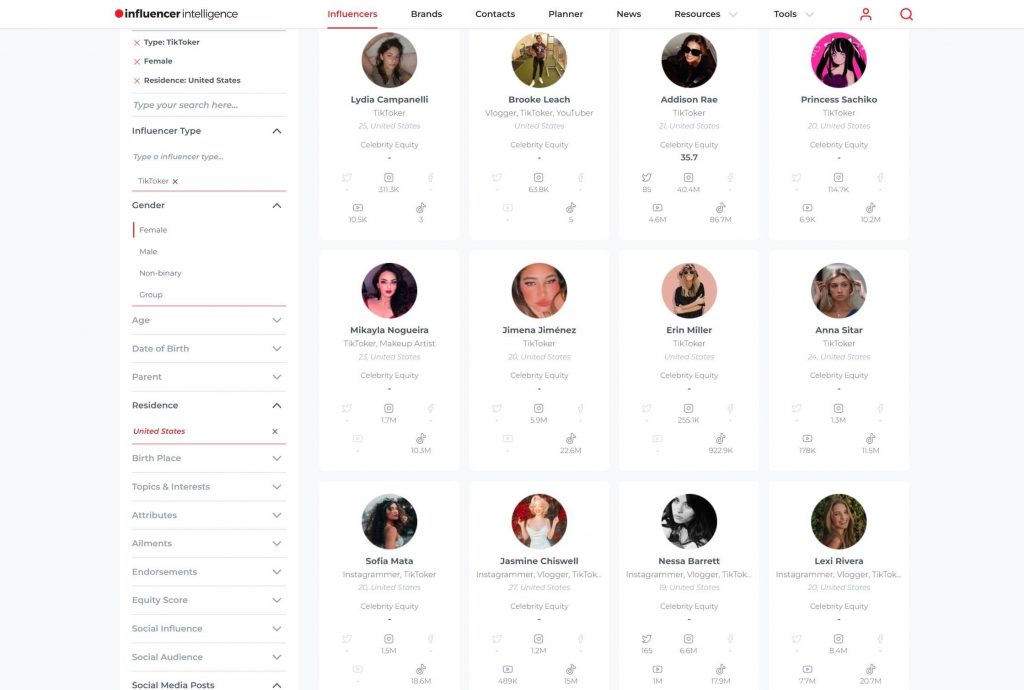 We’ve still not yet scratched the surface of all the information that you can get on an influencer, but we’re also running out of space. At this point, we’ve already relayed more than enough to convince you that you’re getting some true intelligence out of this platform. Take what we’ve shared thus far, and know that the rabbit hole goes far deeper—and that you can search for influencers and filter by all these little bits of data housed in each profile. Know that much of this information is available for other brands, as well, giving you a powerful research tool and a way to benchmark your own performance against theirs. And then also take into account that there is still a full fledged campaign measurement and reporting module built into the platform, and it’s no surprise that this data-driven platform delivers the goods on this end, too. 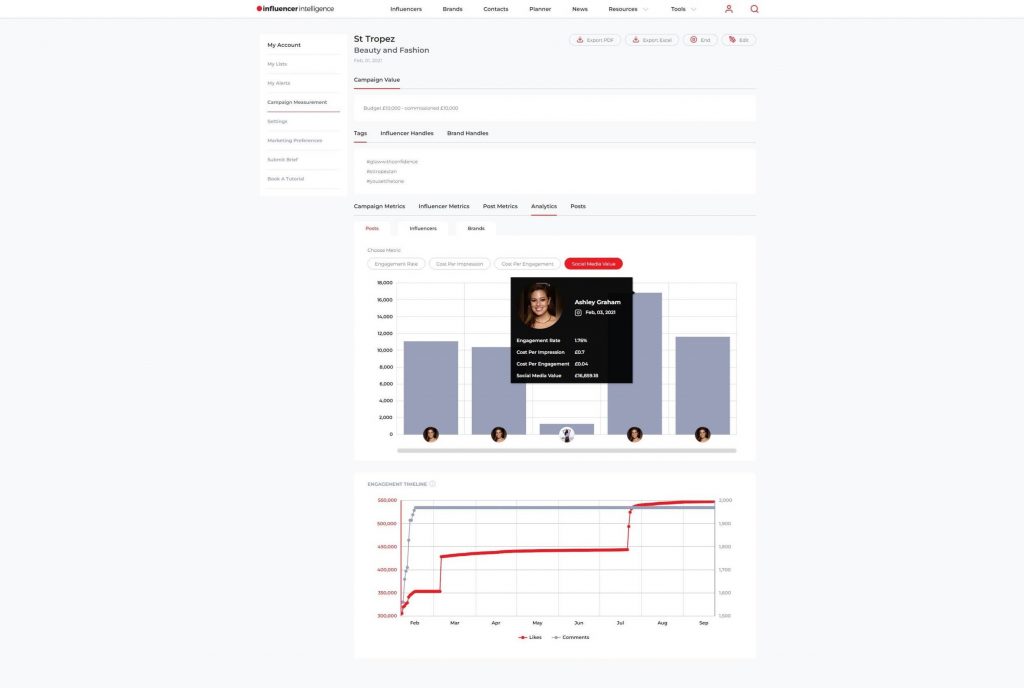 It almost feels a shame to wind this review down here, with so much still left unmentioned. But, in the same way that a review of a movie can’t go into every detail, we can’t synthesize everything about Influencer Intelligence into a single page on a website. This is a good thing. There are other reviews where we have no such qualms about ending them—which isn’t said to knock down these other platforms as much as it is to raise up Influencer Intelligence.

With over 30 years experience in assisting marketers with their celebrity endorsement research, you’d expect a lot out of this company and its product. You’d be right to expect it, and you also won’t be disappointed. No software or research tool can guarantee you success, but we can tell you one thing for sure: if you’re using Influencer Intelligence and don’t see improvements in your marketing—you might be the problem. It definitely isn’t the software.

Influencer Intelligence is the rebranded online version of the UK’s Red Pages, a well researched directory of celebrities that marketers have used as a resource for over 30 years—and will continue to do so for another 30, given the depth of data available here.